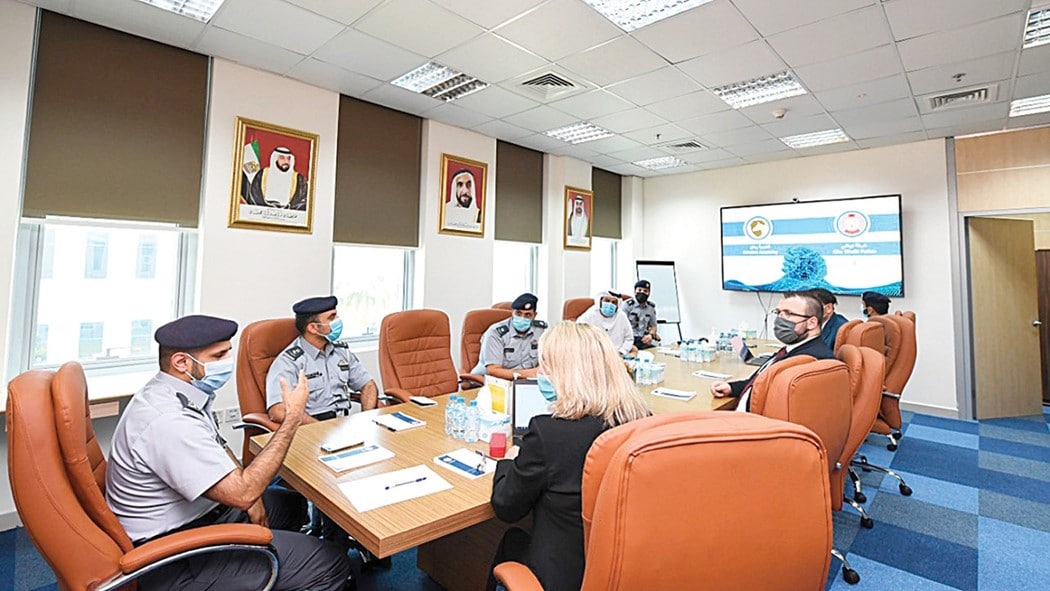 Abu Dhabi Police and Rabdan Academy discussed future prospects for cooperation in the fields of scientific studies within the coordination and partnership between the two sides, in a way that enhances the achievement of the aspirations and directions of the Abu Dhabi government to make the emirate an ideal destination for talents and specialized scientific cadres.
The meeting was chaired by Dr. Musab Omair Al Sheryani, Director of Innovation and Future Foresight Department at Abu Dhabi Police, and from Rabdan Academy, and was attended by: Dr. Amanda Davis, Dr. Peter Nerod from Cambridge University, Dr. Martin Wright from Journal of Policing and the joint research team between the two sides.
The meeting reviewed the scientific research submitted for publication in the Scopus Quartile1 policing journal. The research deals with multiple areas revolving around police management and the police response to the Corona pandemic, the police’s adoption of the concept of soft power, police education, and human resource management in the police.

Future plan
The two sides agreed on a future plan for cooperation in the field of research related to human rights in the correctional and punitive facilities, medical services of the Abu Dhabi Police, the promotion of children’s rights in the United Arab Emirates, the initiatives launched by the Abu Dhabi Police during the “Corona” pandemic, and the smart city / safe city initiatives “Harnessing.” Technology to support police operations” and Abu Dhabi Police initiatives in the field of human resources that aim to enhance the level of health and happiness in the police work environment.
The Director of the Department of Innovation and Future Foresight at the Abu Dhabi Police explained that the meeting comes within the framework of the continuous efforts of the Abu Dhabi Police to strengthen its strategic partnership with scientific and research institutions, based on the firm belief of the Abu Dhabi Police in the importance of scientific research in supporting innovation and foreseeing the future in Our police institution, praising the partnership between the two sides, and its importance in building a positive environment that encourages research, in addition to developing and adopting innovative security solutions based on the results and outputs of the implemented research.
The members of the joint research team stressed the importance of scientific research in achieving the vision of the Abu Dhabi Police represented in “Abu Dhabi is a world leader in sustainable security and safety,” achieving sustainable economic and human development and reaching the highest levels of security and safety by finding and developing tools that would enhance the security and stability of society. and his well-being.
The team stated that the rapid changes in our world require serious and continuous research studies that allow the police to deal effectively with current challenges and prepare for the upcoming future challenges.