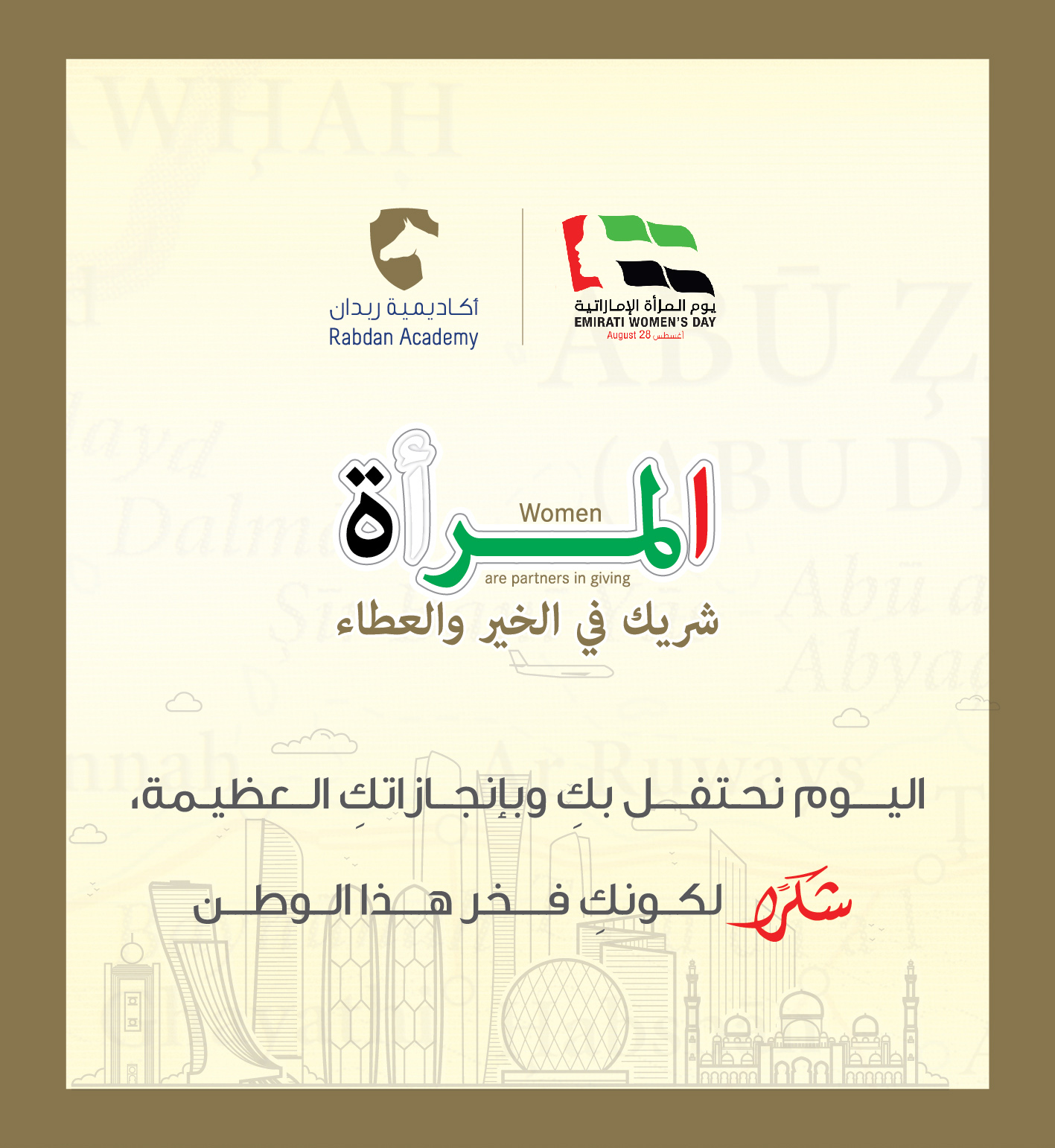 Emirati women have made outstanding achievements in different fields of work

and contributed efficiently and competently, alongside men, in

Abu Dhabi, August 28th , 2017: Rabdan Academy has participated in the UAE celebrations on “Emirati Women’s Day” as part of its efforts to shed light on women achievements in several areas of life and contributions to the progress and development inside and outside nation.

This year celebration comes under the slogan: “Women are partners in good and giving“. The choice of such a slogan comes as sincere acknowledgment of women’s great role and capability being collaborating in a variety of initiatives in the country, their participation in donating to all whosoever in need of charity, and their contribution with all groups of society to the success of the Year of Giving launched by H.H. Sheikh Khalifa Bin Zayed Al Nahyan,  President of the UAE.

The Emirati women are proud of the support of the UAE leadership. They are also proud of the efforts exerted by Her Highness Sheikha Fatima Bint Mubarak, President of the General Women’s Union, Supreme President of the Family Development Foundation and Head of the Supreme Council for Motherhood & Childhood, “Umm Al-Emarat”, for the sake of promoting the status of Emirati women who have accomplished outstanding achievements endeavoring to support the UAE civilizational progress and participating in constructing its renaissance hand in hand with men.

During the UAE Women’s Day, Rabdan Academy has focused on some of the wise sayings of Her Highness, Sheikha Fatima Bint Mubarak that Emirati women are adept at overcoming difficult circumstances and capable of combatting illiteracy and ignorance while fulfilling their domestic duties.

“Mr. James Morse, Rabdan Academy President said: “Emirati women enjoy the UAE wise leadership’s appreciation and constant support to empower them and remove all impediments from their way of progress and recognition of right”

he added: “We, at Rabdan Academy, provide unlimited consideration to the working or studying women, in order for them to play the role entrusted to them and realize their dreams and ambitions,”.

He has also drew the attention to the fact that women of the UAE, thanks to the support of the wise leadership, have proved their efficiency and excellence in all the responsibilities with which they were entrusted. Women have established their strong effectiveness and active contribution in serving the nation in numerous fields including joining the armed forces, national service, police and security.

Pertaining this point, he has mentioned the fact that Rabdan Academy female students are being prepared to work in the fields of security, safety, crisis management and emergency readiness tasks for the sake of serving the society towards a more resilient nation.

“On this occasion while UAE is celebrating the UAE Woman’s Day, and on behalf of all the employees and students of Rabdan Academy, I salute the martyrs’ mothers who have sacrificed their children’s lives for the sake of  the soil of nation,” he added.

“The wise leadership has exerted all the efforts to provide women with the most suitable education and work environment, to protect their rights and dignity and to utilize their abilities and competencies to contribute to the construction of nation and its institutes- hand in hand with men”

“The United Arab Emirates has equipped women with all means of success, excellence and creativity in several fields of life. Hence, women have attained standard accomplishments in the last forty years since the UAE federation establishment. Emirati women have become a role model and superior to other women all over the world in all knowledge fields,” she added.

“While receiving knowledge and science at Rabdan Academy in different specialties of security, technology and administration, the daughter of the UAE shoulders a serious responsibility in maintaining security and stability hand in hand with men,” said Dr. Khawla.