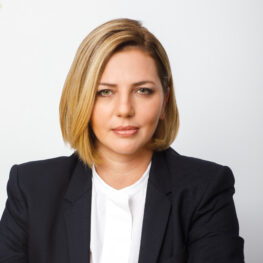 Anna Dolidze graduated from the Tbilisi State University with a degree in Law summa cum laude (2002). She worked for the international humanitarian organization Save the Children in Georgia. Prof. Dolidze was awarded a full fellowship by the Dutch government to study at Leiden University where she earned her LLM. She was elected Chairman of the Georgian Young Lawyers’ Association (GYLA), (2004). She practiced civil rights litigation and represented the organization in the National Constitutional Commission, Commission for the Human Rights in Prisons and the Expert Commission for Georgia’s European Integration. Dolidze was recognized as a Young European Leader (2009). Dolidze earned her SJD at Cornell Law School with full financial scholarship and residential fellowship at Telluride House (2013). Dolidze addressed the Tom Lantos Human Rights Commission of the United States Congress (2012). She became assistant professor of law at the University of Western Ontario (2013). Lectures transnationally, including at Duke University in North Carolina, Helsinki España-Human Dimension in Madrid, Sorbonne University in Paris, Kazguu in Kazakhstan, and Elmira Maximum Security Correctional Facility in New York State. In 2015 she took up the position of the Deputy Minister of Defence . Then, was appointed as the Chief Legal Officer for the President of Georgia. The President of Georgia appointed Dolidze to the High Council of Justice, the body that oversees the judiciary (2018). Dolidze has been an advocate and author of judicial reform agenda.

Prof. Anna Dolidze is the author of three books: “Towards an Unknown Port” (2016),  “Academic Writing in Law”(2017), “First Steps: The Judiciary of Georgia during the First Republic 1918-1921” (2019) and numerous scholarly articles about transitional justice, human rights and rule of law.